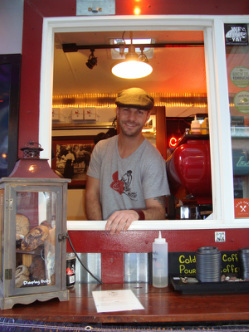 I recently had an opportunity to interview Todd Edwards, founder of the Olé Latte Coffee cart, and is sometimes one of our stops on the Portland Food Carts & Neighborhoods Tour.  Todd’s outgoing and friendly personality naturally draws people to him, and while we chatted he remained busy whipping up special drinks for his regulars and offering samples to a couple of Texan’s who were vacationing in what they called their “favorite city”.  The following is glimpse into a day in the life of a Portland food cart owner, offered from Todd’s perspective:

When did Olé Latte Coffee Begin?
We’ve been at this location for the last two months, but we originally opened last May over at NE 20th and Everett.  When we got the call to come down here we jumped.  We waited for 9 months to get into this pod, and it’s turned out to be the perfect spot for us.  How our cart fits here, it’s like the end of the rainbow; exactly where we should be.  Everything has worked out perfectly.

What made you choose a food cart?
I’m from Portland, and I originally considered doing a brick & mortar café but it can be a really tough environment.  It’s common to over commit into a 5 year lease before you establish a name for yourself, whereas the food cart is an affordable opportunity where you can get a name for yourself and build a following.

Are you interested in expanding in the future with other food cart locations or possibly even a cafe?
I am interested in both, but right now I’m more interested in opening up more food carts because I’m having a lot of fun with this type of business.  I think the next project will be to build an event cart, so I haven’t committed to any specific food pods yet.  I’ve recently been approached by a couple of other businesses who would like to partner up and open a café – which is a very intriguing idea especially as they’re already established in the Portland area – so that could be a future possibility.  I’m excited to get another mobile food cart going first though.

Have you felt any push-back from the local businesses?
None.  Everybody has been really receptive.  The reaction has been more “we’re so thankful you’re here!” rather than “why are you here?”  The support has been such a blessing for us, and I couldn’t be more elated about being here.  At first I thought there might be a little static, but there just isn’t.  I’ve even had some of the other coffee shops come up to say “hi” and check out what we’ve got going on that’s unique and promising.

What has it been like being a part of the food cart community?
The carts that are close to us are very community involved, because we’re all looking out for each other and making sure that we contribute to the good of the pod.  Most everyone that I’ve visited with, even at the other lots, has been extremely receptive and friendly.  We’re all in it together, and everyone has been great about helping us and promoting our cart.

About how many customers do you serve a day?
I’ve been serving, on average, between 50-75 customers a day.  We’re just starting out at this location, only two months in, and we can already measure our success.  It isn’t just new people coming by; there are people who have become regulars that come up not just once, but two, maybe three times a day to get something from us.  It’s been exciting.

Why coffee?
Because I love wine.

Truthfully, it really was wine that drew me into the coffee business. I’ve always loved the way the grapes were grown and harvested; how the climate affects each one of the grapes every year making that wine different and unique.  You go to the wineries and get the special wine from their single vineyards, the stuff that hasn’t been blended.  That’s the same thing we’re doing here, but with coffee.  It’s the exact same concept.

I had no idea until last year in February when I was going to go open the café, and then I realized I should just start smaller.  But what could I do?  That’s when I decided I wanted to do coffee in the morning and wine in the evenings.  I asked myself if I could love coffee as much as I love wine, and I’ve discovered that I can. So I dove into it headfirst without even looking to see how deep the pool was, and I discovered that the pool was so deep.  I could go anywhere and learn about so many different things, I had no idea.  I’ve found that the more I understand, the more I want to keep discovering new coffee and trying new things.  Roasting, creating new recipes… it’s boundless.

Has that been the thing that’s surprised you the most about this journey?
How much I love coffee?  Yeah, absolutely!  I still love wine, but I’ll tell you, I have a true passion for coffee now.
~
Todd and his crew are available daily for smiles, samples, and downright delicious coffee.  Olé Latte Coffee is located at 1003 SW Alder Street, in Portland, and on facebook at http://www.facebook.com/OleLatteCoffee?fref=ts .